On November 28, China Minmetals signs a strategic cooperation framework agreement with Shenzhen Stock Exchange in Shenzhen. Guo Wenqing, General Manager and Deputy Secretary of the Party Group of China Minmetals, and concurrently Chairman of MCC, and Wang Jianjun, General Manager of Shenzhen Stock Exchange, and Deputy Secretary of the Party Committee, attended the signing ceremony and witnessed the signing. Before the signing ceremony, Guo Wenqing and Wang Jianjun held a work talk and had in-depth exchanges on further deepening strategic cooperation, giving full play to the functions of the capital market platform, improving quality and efficiency of state-owned enterprises reform, and enhancing the ability of finance to serve the real economy.

Guo Wenqing thanked Shenzhen Stock Exchange for its care and support over the years and introduced the development history of China Minmetals and its development situation since the strategic restructuring. Guo Wenqing pointed out that after the strategic restructuring of China Minmetals and MCC, two Fortune 500 enterprises, in December 2015, China Minmetals took the lead in building the whole industrial chain from resource acquisition, exploration, design, construction and operation to circulation and deep processing in the global metal mining industry. As one of the first state-owned capital investment companies in the China's metal mining industry, China Minmetals shoulders the mission of ensuring the supply of national metal resources and is committed to building a metal mining enterprise group that is "the first in China and the first-rank around the world". In 2018, its revenue reached more than RMB 500 billion, the total assets under management reached RMB 1.85 trillion, and its profit hit a record high. China Minmetals is now building up its "four beams and eight columns" business system comprised of metal mining, metallurgical construction, trade and logistics, as well as finance and real estate. In terms of metal mining, China Minmetals has developed and operated world-class mines such as Las Bambas copper mine, the Dugald River zinc mine and Ramu nickel mine in Papua New Guinea. In terms of metallurgical construction, it has the world's first metallurgical construction enterprise, and accounts for 90% of the metallurgical construction market in China and 60% in the world. In terms of trade and logistics, it has a strong and sound global trade circulation network covering more than 60 countries and regions in the world. In terms of finance and real estate, China Minmetals, one of the three central enterprises with all the financial licenses, has a strong capacity of investment, financing and resources allocation; China Minmetals takes up two of the 16 central enterprises with real estate as their main business identified by the State-owned Assets Supervision and Administration Commission. In addition, China Minmetals is a leading central enterprise in scientific and technological innovation, with 37 national key laboratories and scientific and technological platforms.

After the talk, Guo Wenqing and Wang Jianjun witnessed the signing of strategic cooperation framework agreement between China Minmetals and Shenzhen Stock Exchange. Ren Zhufeng, Deputy General Manager and Party Group Member of China Minmetals, and Wang Hong, Deputy General Manager and Member of the Party Committee of Shenzhen Stock Exchange, signed the strategic agreement on behalf of both sides.

According to the agreement, the two sides will adhere to the "long-term cooperation, compliance, equality, free will, project-driven approach, innovation and win-win" principle to explore an all-round, multi-tiered, long-term, stable and mutually beneficial strategic partnership according to the needs of the development planning of both sides around the capital operation of listed subsidiaries of China Minmetals, the cultivation of backup listed subsidiaries, expansion of diversified financing channels, industry-finance integration platform matchmaking, and the training and consulting of capital operation planning. 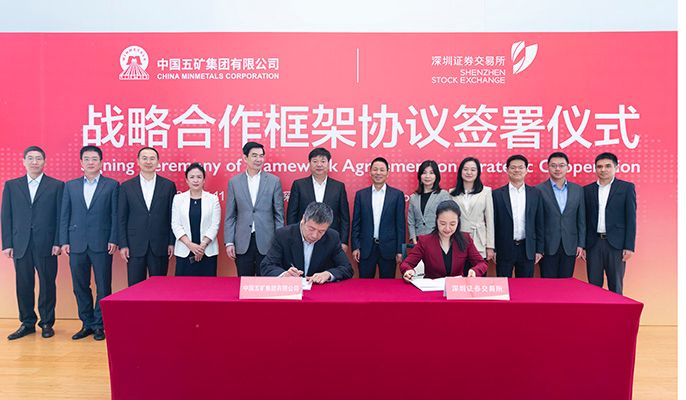 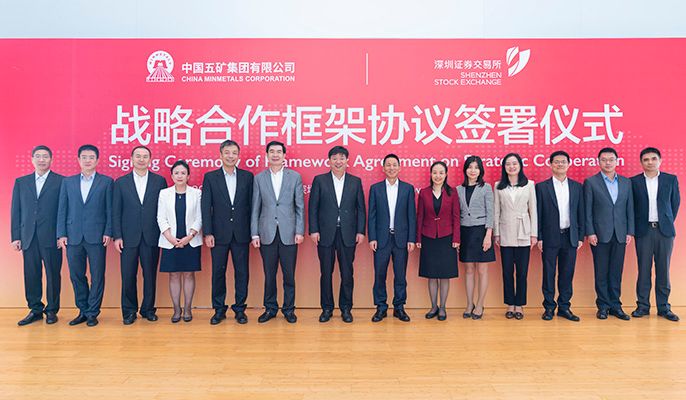 Group photo of the two sides 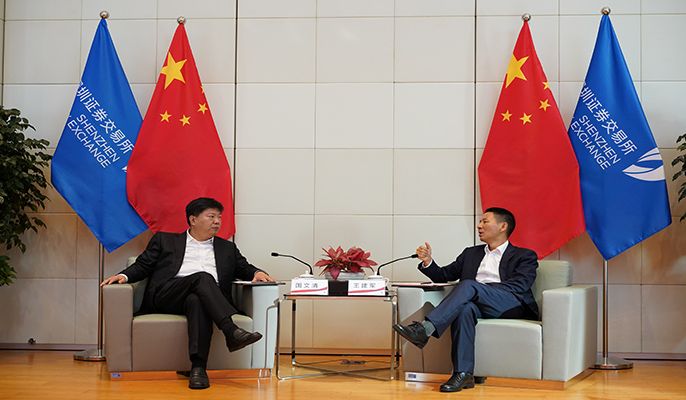 Guo Wenqing having a cordial talk with Wang Jianjun

Scene of the talk